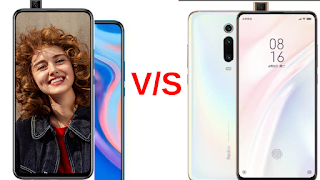 The Dual-SIM (Nano) Redmi K20 Pro smartphone runs on the MUI 10 based on Android 9 Pie. The phone has a 6.39-inch Amolade Full-HD + (1080×2340 pixels) screen, its aspect ratio is 19.5: 9 aspect ratios. The screen-to-body ratio is 91.9 percent. The Redmi K20 Pro smartphone is equipped with hardware DC dimming support and in-display fingerprint sensor.
Read More: Huawei Y9 Prime vs Redmi K20 Pro | Battery, Price, RAM, Full Specification and Price
Redmi K20 Pro Comes with 2.85 GHz octa-core Qualcomm Snapdragon 855 processor. With the Adreno 640, GPU and 8GB of RAM Variant are available. Now let see camera setup. This phone of the Redmi brand has three rear cameras, 48-megapixel primary camera which is equipped with the Sony IMX 586 sensor and its aperture F / 1.75. There is a 13-megapixel secondary camera with a wide-angle lens and the third sensor is 8 megapixels. A 20-megapixel pop-up selfie camera has been given for selfie and video calling.
The Redmi K20 Pro has a 4,000 mAh battery, which is equipped with 27-watt fast charging support. Redmi’s 20 Pro has also been given a USB Type-C port and a 3.5 mm headphone jack. Talking about connectivity, the phone has Wi-Fi 802.11 AC, Bluetooth version 5.0, GPS and NFC support.
There is storage up to 256 GB for saving photo, video and other things. The length of the phone is 156.7×74.3×8.8 millimeters and weighing 191 grams.
View In Flipkart

Chinese tech company Huawei has launched Y9 Prime 2019 in India. This is a smartphone with the first pop up selfie camera from the company. The triple rear camera setup has been given on the phone. The company has kept its price at Rs 15,990. This price will get 128GB of storage with 4GB of RAM.
The phone has a full view display and there is no notch in it. This smartphone is dual-tone finish, the rear panel is a 3D curve. This smartphone is available in two color variants Emerald Green, Sapphire Blue.
Talk about specifications, it has a 6.59 inch Full HD Plus display. The LCD panel has been used in this. Not a bezel in the display and not even a knock. Hisilicon Kirin 710F in the phone has been marked with the chipset.
The phone has 4GB of RAM, while its internal memory is 128GB. Micro SD card can be extended up to 512GB. This smartphone runs on Android 9 Pie-based EMUI 9.1.
Triple rear camera setup for a photographer has been given on the phone. One lens is of 16 megapixels, the other is 8 megapixels and it is ultra-wide, while the third lens is of 2 megapixels and for depth sensing. A motorized pop-up front camera is provided for Selfie, which is 16 megapixels.
The phone has dual SIM support and its battery is 4,000mAh. This smartphone has a rear fingerprint scanner. It offers standard features such as USB Type C, WiFi 802.11, WiFi Direct, GPS, FM Radio.
View In Amazon

This is all about Huawei Y9 Prime vs Redmi K20 Pro. Hope you like it make sure to share this to your friends and family and if you have any doubt related this make sure to comment down below. visit Phone vs Android For More.