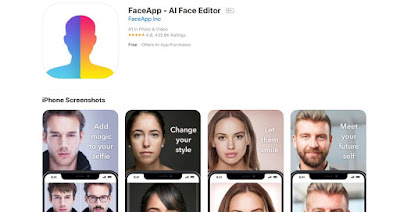 Face App has raged around the world. This app turns a picture of any person artificially into an old face. People are posting their potential picture of old age on social media through this app for fun. But there are some dangers along with adventures in this game. Technology experts say that through this Russian when you send an app to change the photo, it goes to the face ap server. By selecting the picture of the user there, it is made through artificial intelligence. You can also upload photos and also click photos from the app in it. Actually, you are not only giving a photo to that app but you are giving it a lot. Your picture can be used later in public, this app can access the information from your phone and later can use this information anywhere. Many people are also concerned that this app can access all the photos of your phone. Although iOS and iPhone have the option to decide which photos are meant to be handover and which pictures are not.
Read More: Yo Whatsapp is Safe or Not | What is Yo WhatsApp |  Whatsapp vs Yo WhatsApp
Concerns over the face app reached the US Senate. Chuck Schumer, a minority leader in the Senate, demanded a probe into the Face Apes, wrote in a letter posted on Twitter: “It is very worrisome that private data of US citizens are getting in foreign countries. “Face Ape has dismissed these concerns with the face. This company says that photos of people are not being stored permanently nor are they being broken into personal data. The company says that the photos the users are selecting are being edited.
The situation is not very clear about how much crisis is on the privacy of this app, but it is clear that it has the advantage of not using it. The company says that it now has eight million users In 2017, Face Ape had been quite controversial when it had the facility to edit user breed in one of its features. When the criticism started, the company later apologized and withdrew that feature. This is not a new app, even two years ago, the app has come into a controversy regarding ‘ethnicity filters’. There was a tool to change the face from one race to another. However, a French cybersecurity researcher says that the Face app only takes pictures that users submit.
Until recently a few years ago, there was no buggy about digital data. Giving someone your phone number, e-mail ID, to a marketing company rarely made a difference. But as soon as the Face Ape became viral, the questions became increasingly concerned about data security. But if you wait a bit, there is no special difference between the Face app and the other app you have on the phone. Let’s know-how?
Actually, whenever you install an app in your phone, then it has some conditions and often you do not read those terms, you install that app on the phone and give all that app access to it. For example, if you have installed Snapchat, then you are giving permanent, royalty-free rights to use your photo as per the terms of this app.
Face app is made by Russia’s wireless lab and is just two years old. I do not know how this app’s voice is coming from the past week and #FaceAppChallenge is on social media. CyberLayers says that there is no evidence that Face Ape misuses the user’s data. All this is just a rumor because the company has not taken the privacy policy seriously. Although the Face App is notorious for data theft, Google has your whole horoscope. All of Google’s companies do so. Although Face Ape did not mention the terms of use in its privacy policy in clear terms. This thing is missing from the terms of the face app that if a user deletes his account, then his data will also be deleted. That’s why CyberLayers is treating it as a violation of the European Union’s General Data Protection Regulation and Data Protection Bill.
The loss is not known but the news of the Face Ape is of great benefit. 18 years ago a photo of a kidnapped child was made to look like a fashion show nowadays and then the police found that child. Yes, in this world of rumors we can not take any guarantee of the truth about this news.
Well, there is one more thing. What data do we have that some company will steal? And steal what he will do There are hundreds of crores of photographs on social media lying in junk prices, no one asks, but nobody wants to lift it without any app. Then, if an app is made for fun then have fun. There are so many tensions in such a world, now you will find tension in the face app, wrinkles will start to appear on the face without using the app.