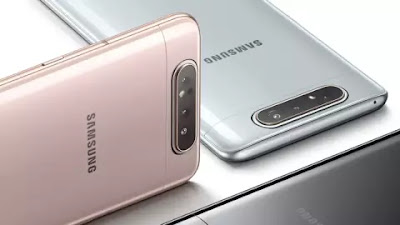 Another new information about Samsung’s next flagship smartphone Samsung Galaxy A90 series has been revealed by South Korean company Samsung.
A few days back, it was said in the leaked that this smartphone series can be launched with rotating or sliding triple rear camera.
Read Also: Samsung Galaxy Note 10 & Galaxy Note 10 Pro – headphone jack & type-C headphone inside the box
According to the new leak, the smartphone series will not be rotating or sliding camera set-up.
Speculation about the Samsung Galaxy A90 series being a rotating or sliding camera was also being done because the previous smartphone of the series was launched with the Sliding Rotation Camera Samsung Galaxy A80.
In this case, it was speculated that it would be launched with the same design and camera module.
According to the new leaked information, this series has been spotted with the Infinity-U display panel. In such a way, a U-shaped waterdrop can be served on the front.
The Infinity-U display panel has been used in previous smartphones of Samsung Galaxy M and Galaxy A series, which was launched this year.
Most of these smartphones have Waterdrop Notch features.
There have been many reports about the Samsung Galaxy A90 smartphone. The leaks have been coming out from the past for quite some time but now it appears that a new news is coming up which says that this phone can be launched in the market by the name of the next name.
Its model number is SM-A908N. It is being speculated that this phone can be launched under the company’s new Galaxy R series.
At the same time, another news is also revealed in which it has been said that the company is also testing the Galaxy A90 5G. Dual rear camera can be given in this phone.
Tipster @OnLeaks has tweeted that this phone can be launched under Galaxy R-Series.
Two smartphones are reported to be launched under this series. According to the news, these two phones are likely to be launched with large display and triple rear camera. At the same time, it is also being said that 5G support phones can also be launched under this series.
Just as the now-launched smartphones are giving pop-up or slide-out camera modules, the information will not be sorted out in this phone or the other.
If you liked this post, please increase your morale and comment on how you like this smartphone and follow our page for all the information related to technology and mobile. From which our news can reach you as soon as possible.
Samsung Galaxy A90 has been making rounds of the leak arena lately, and a 5G variant of the phone is reportedly under testing as well. Now, new details about the two phones have appeared online. Samsung is reportedly planning to power both phones using Snapdragon 855 SoC.
One of them is tipped to offer 5G connectivity and will bring 45W fast charging support. Separately, the tipster, who had earlier claimed that Galaxy A90 may be launched under Galaxy R-series has now retracted his statement.
The first one will reportedly carry the model number SM-A908 and will come with 5G support, hence the Galaxy A90 5G moniker. This Galaxy A90 variant is tipped to draw power from Snapdragon 855 and will come equipped with an in-display fingerprint sensor. It will sport triple rear cameras, which include a 48-megapixel primary camera that will be assisted by 8-megapixel and 5-megapixel sensors. This model will reportedly be the one to offer support for 45W fast charging.
The second Samsung Galaxy A90 variant is tipped to carry the model number SM-A905 and will also be powered by the Snapdragon 855 SoC. It will pack a 6.7-inch display and an in-display fingerprint sensor, just like its 5G-ready sibling. The imaging hardware on this phone will comprise of 48-megapixel, 12-megapixel, and 5-megapixel cameras.
This particular variant is also tipped to come with what is claimed to be Tilt OIS technology, which appears to be a version of the optical image stabilisation (OIS).

This is Samsung Galaxy A90 5G. Hope you like it make sure to share and visit Phone vs Android For more.