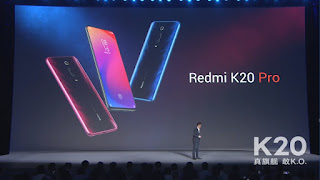 As you may know, the recently launched OnePlus 7 and Asus 6Z smartphones in the Indian market, and the fastest running processor Qualcomm Snapdragon 855 has been used in both of these smartphones, but both of these smartphones The price is more than 30,000.
Read Also: XIAOMI IRON MAN AVENGERS DESIGNER PHONE
Today, in this article we are going to tell about a smartphone which comes with Snapdragon 855 processor, but this phone is priced at around 24,999 in India.
Actually, we are talking about the launch of the 20th generation of smartphones Redmi launched on July 17 in India. A few days back, the launch date of this smartphone by Redmi India has been confirmed on Twitter, but there was no clear information about the price of this smartphone. According to information received from the sources, it is being told that the initial price of Radmi 20 Pro smartphone in India will be ₹ 24,999. If this happens then surely this smartphone will break all previous records of India and become a superhit smartphone.
According to the information given by sources, Radmi’s 20 Pro Smartphone will be launched in India in four variants. Redmi K20 Pro will cost Rs. 24,999 in India. This price is of 6GB / 64GB variant of this phone. The price of 6GB / 128GB variant is 25,999 rupees. Speaking of the 8GB / 128GB model, it costs Rs 27,999. Top variant 8GB / 256GB will be priced at Rs 29,999. At the same time, the price of the Redmi K20 will be Rs 20,000.
For your information, let’s tell Redmi 20 Pro smartphone price even if ₹ starts from 24999 but all the features in this phone are available ₹ 50,000 – ₹ 60,000 smartphones. Indeed, the Redmi K20 Pro is the first smartphone of the Redmi lineup, with the flagship Qualcomm Snapdragon 855 processor. The Redmi K20 and the Redmi K20 Pro smartphone were launched in China on May 28. The Redmi K20 and the Redmi K20 Pro both have a triple rear camera and pop-up selfie camera in the back of both smartphones.
Now let’s take a look at the specifications found in these smartphones, both the Redmi K20 and K20 Pro both have a 6.39-inch full HD + Amoled screen whose resolution is 2340×1080 pixels. Redmi K20 Pro is powered by the smartphone Qualcomm Snapdragon 855 processor. At the same time, the Redmi K20 has a Qualcomm Snapdragon 730 processor. Both smartphones have a 4,000 mAh battery. The Redmi K20 Pro has 27W Fast Charging touch while the Redmi K20 has 18W charging touch.
Chinese smartphone manufacturer Redmi has finally released 20 of its flagship smartphone Redmi in China and Redmi KE 20 Pro. In fact, Redmi’s 20 Pro is a premium variant of both of these smartphones while Redmi’s 20 is a slight variant of it. Today, in this article, we are going to talk about Redmi’s 20, whose initial price is only 20,200 rupees in Indian Rupees in China.
For your information, let’s tell Redmi 20 and Redmi 20 Pro only the difference between the processor, fast charging technology and RAM, the rest of the features are the same. The Radmi K20 has a Snapdragon 730 processor with up to 6GB of RAM and 128GB internal storage. At the same time, its battery comes with 18W fast charging touch. Now let us briefly explain all the specifications of this smartphone.

First of all, in the phone’s display, Radmi K20 Pro has a 6.39-inch AMOLED Full HD + display, whose resolution is 1080×2340 pixels and the aspect ratio is 19.5: 9. The screen-to-body ratio of the phone running on Android 9 Pieces is 91.9%. If talked about the processor, the phone is equipped with a Qualcomm Snapdragon 855 processor with 8GB of RAM.
If you want to keep moving towards the camera department, you will be given a Triple Rear Camera (48MP + 13MP + 8MP) setup in Radmi K20 Pro. The front of the phone has a 20-megapixel pop-up selfie camera. To give power to the phone, it has a 4000mAh battery, which offers 27W fast charging. For connectivity, options like Wi-Fi, GPS, USB Type-C port and 3.5mm jack have been provided in the phone.

This is all about this phone. Hope you like it make sure to share this and visit Phone vs Android for more.