Skip to content
Realme X – Watch this before Buying 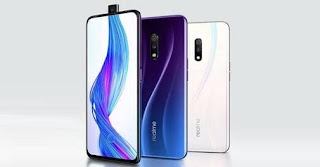 After weeks of waiting, Chinese smartphone major Realme has finally launched its flagship model in the Indian market. The smartphone is called the Realme X and comes with an in-display fingerprint sensor and a pop-up camera. The Realme X initially launched in the Chinese market a couple of weeks ago and has now made its way to the Indian shores alongside its younger sibling, the Realme 3i, which is a budget segment offering.
Read More: Redmi, the world’s fastest phone, will launch the cheapest Snapdragon 855 smartphone
We will be conducting full-fledged tests on Realme X in the coming days. Stay tuned for the full Realme X review. Until then, here are our first impressions.
The new Realme X brings in a pleasant change of pace in terms of design and specifications. During the launch event, Realme talked about their motto which is “Dare to Leap” and starting with the Realme X, it seems the Oppo sub-brand has undoubtedly made some bold changes and brought about a number of new design elements which have not been seen in the Indian smartphone market as of now like the Onion and Garlic variants (no pun intended here!). The other variant is the Spiderman: Far from Home edition which comes with a VOOC charger and a Spiderman protective case.
Realme company has launched its new flagship smartphone Realme X in the Indian market today. This phone was in discussion for a long time due to its price and features. But now the company has launched this phone in the Indian market. Well, the phone has given great features such as Qualcomm Snapdragon 710 processor, 48-megapixel rear camera and 16-megapixel pop-up selfie camera. The price of the phone is Rs 16,999. But this phone also has some drawbacks due to which you should not take this phone. So let’s know about these shortcomings in detail.
1.Plastic Design – Well if you buy a premium of 17 thousand rupees in the market then you will get a premium design smartphone. But the Realme X smartphone is made of plastic material. So, the smartphone does not seem to be worth 17 thousand on hand. At the same price, other smartphones like Nokia 7.1, Nokia 6.1, Redmi Note 7 Pro come with smartphone gloss back finishing.
2. SD Card: Not supporting Micro SD card and not having LED Notification Light- Realme X Phone has not been replaced by Micro SD card. Apart from this, the LED Notification Light feature has also been given in this phone.
3. The pop-up camera slows and low battery power: Many companies give big things to make the hip in the market but they do not work properly. In the same way, Realme X phones have been given a pop-up selfie camera but the selfie camera extends quite slowly from the phone. On the other hand, where the companies are charging 4000mAh and 5000mAh of the battery at this price, only 3750mAh battery is provided in this phone.