Skip to content
Mi Band 4 – Top 5 Best Feature of XIaomi Mi Band 4. Xiaomi’s much anticipated Mi Band successor, Mi Band 4, is to be launched in China on June 11 in a program. And just one day before the official launch, MI Band 4, which is to be announced soon, has been placed for pre-order on the Chinese e-commerce website AliExpress, and we have additional information about this much-anticipated product of Xiaomi Is also giving. 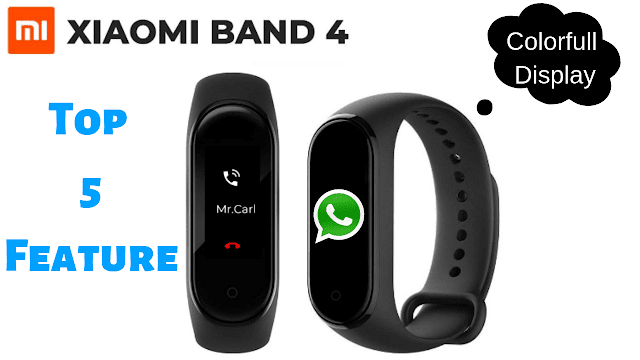 Mi Band 4 will now be launched in China. There is no word on it yet when the smart band will come to India but it will soon reach the Indian shores. Launch official poster of Mi Band 4 has been leaked online so that the full design of the smart band is revealed. Apart from the full design, the price of the Mi Band 4 also leaked before the launch and surprisingly it is more expensive than the Mi3 3.
Mi Band 4’s overall design appears to be similar to the Mi Band 3 with the rubber band. The display is the main attraction of Mi Band 4. Mi Band 4’s screen looks much bigger and brighter than before. The best bit, Mi Band 4 is seen with colorful display, which is the first performance of any Mi Band. In June, it was revealed that the fourth generation Mi Band would be much smarter than the first MiBands to be launched. In the poster, Mi Band 4 is shown with a curved display.
Read More: Mi Mobile Phone |Mi Mobile 4G | Mi mobile phone under 10000

Some leaks show that the Mi Band 4 will also include a color OLED screen, and it will be available in two models – one with NFC support and the other without the NFC. This is the cost of the base version of wearable without NFC support reports. This indicates that the price of Xiaomi NFC-enabled Mi Band 4 can be higher.

Xiaomi Mi band 4 will be adding a bigger 135mAh battery. To improve connectivity and battery performance of Mi band 4. The Mi band 4 comes with a bigger battery as compared to Mi band 3, as we know that the mi band 3 comes with 110mah battery and this comes with 135mah battery, ultimately the battery is good.
Xiaomi might launch another variant of the Mi Band 4 with support for in-built voice assistant called Xiao. This is just like Google Assistance and Xiaomi mi band 4 voice assistant is new is Mi band 4.
It has 20 days of claimed battery life and it provides water resistance up to 50 meters. Mi Band 3 also has the ability to monitor the heart rate. Like Mi Band 2, users can get app notifications and use the band for health management activities.
Mi Band Alternatives

This is Top 5 Best Feature of XIaomi Mi Band 4. If you have any doubt make sure to comment down, share this post and make sure to visit Phone vs Android for More.